Well, I'm back at it.  Without an artist, that means one of 3 things:

1.  Make a video game with ugly graphics (either a plain ugly game, or some game where I can cheat and use the theme in some way to my advantage to get away with some sort of ugly)

2.  Have my next programming project be a non-game (that doesn't require an artist)

3. Port Anguna to something else!

I recently found a cool product called the Airplay SDK, which is a whole toolkit for doing handheld game development in C++.  Using it, depending on licensing and whatnot, you can build games for all sorts of things:  iPhone, Android, Windows Mobile,  etc.  The important part to notice was that I could make iphone games without going out and buying a Mac! (I had an old mac mini at one point, but it was too pathetic to do development on...and the iphone develepor tools required an intel mac, which this wasn't).

So I bought an iPod touch and started porting.  Unfortunately, a week or two into my efforts, Apple changed their terms of service, which, as far as I can tell, make it really unclear whether Airplay apps will be approved for the app store.  That was a bit discouraging, but I'm hoping they will be, so I'm moving forward with the effort anyway.

So, after a few evenings and lunches of work, here's what I've got (this is a screenshot in Airplay's simulator): 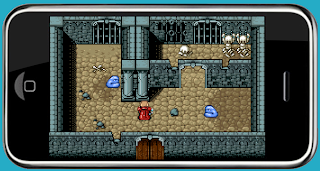 At Chris (the artist)'s advice, we decided to scale all the images double, which means it will look a bit more pixelated than most games, but it exactly matches the full screen resolution of the iphone, and if we push it as a "retro" feel, may go over ok.

The porting so far is coming along fairly easily -- it's amazing how much easier it is to get graphics on the screen with a more powerful device and thus more powerful sdk.  No more messing with vram and OAM attributes.  The biggest hurdles I ran into so far are based on the differences between C and C++.

I also ran into a difference in how referencing external constant structs works.  In C, I did a lot of:

and in a different file:

and then referring to it in that file.

Well, for some reason something is different in C++, and this doesn't work.  I'm guessing it has to do with the differences in C++ about how const is handled, or more likely, how structs are actually just classes without functions, but my knowledge of the gritty details of C++ is embarassingly lacking.  So I just changed how I did it. (now in the 2nd file, I'm referring to a pointer to the struct instead of the struct itself).

Other than that, it's been incredibly straightforward -- the bulk of the codebase just worked.  I'm still having to muck with how palettes are handled a little bit  (my animation definitions indicated which base image to use for an animation, so a set of palette-swapped enemies just all used the same animation definitions.  I can still do this, but the SDK handles palettes a bit differently, so it's a few changes).

I haven't yet applied for my iphone developer's license, so I've been running everything in a simulator so far, so the next step is going to be to get that and actually run this on the hardware, and see what breaks.  (or what the performance is like).

Then, it will be time to work on the UI -- the UI, menus, and controls will need a complete overhaul, so that will likely be the biggest portion of the work involved in this port.