Everything seems to be working

Ok, back to the content that I originally started to post before I realized that my audio wasn't working on hardware. Which is: I think I'm pretty much done! (again...didn't I say that before?)

Turns out (for those of you interested in the details) that something somewhere was sending some dummy messages over the IPC FIFO (the mechanism by which the arm9 and arm7 processor communicate). Because the only messages that I send over it were instructions to play songs, I assumed any messages received were instructions to play songs, and it was trying to play a nonexistent song. Better sanity checking on the commands coming through IPC fixed that.

So now I've made a test build. I'll sanity check it over the next day or two, then send it out to anyone interested in helping test. Then call this thing done!
By Nathan at November 20, 2008 1 comment:

Well, I finally gave up (for now, at least) waiting on eKid's audio library, and instead used a new library (LIBXM7) that sverx from the gbadev forums recently released. And it works perfectly -- well, on the emulator. I thought it worked right on hardware, but turns out I was using the wrong build. So there's more work to do -- either waiting on eKid, or getting this LIBXM7 to work right on hardware....
By Nathan at November 20, 2008 1 comment:

I promised a screenshot of the amazing new title screen that Chris made. Of course, the screenshot doesn't capture the alpha-blend fade or anything, but it still looks cool: 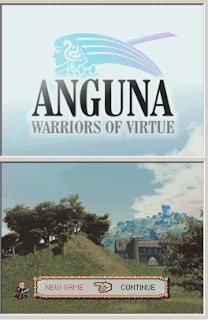 Hurry up and Wait

I was on such a roll for awhile, but now everything has slowed down, unfortunately. I added the power-saving features that I mentioned last time, and debugged a whole bunch of minor issues that testers had found for me.

Chris (the artist) sent me an amazing new title screen, which I just finished adding, completely with a cool alpha-blend fade-in of the title. (Which I'd show a picture of, except I forgot to check in one of the source files into subversion, so I can't build it from this computer right now).

Now, I'm just left with replacing the audio engine. One of the people testing for me (ekid) told me he's finishing up a new audio engine that's supposed to be pretty good. Based on one of his test builds, it actually properly plays all 3 of my songs from Anguna (where my current solution completely fails on one of them, and butchers a few notes from one of the others). Hopefully he'll finish that soon, and I can pull it in easily.

So I'm still advancing, slowly. But doing a bit of waiting at this point.
By Nathan at November 13, 2008 No comments: