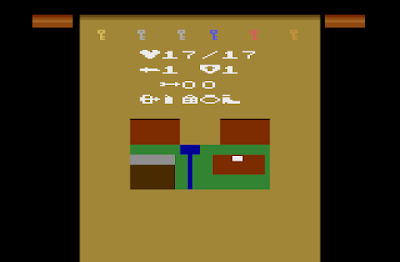 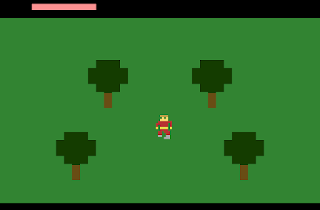 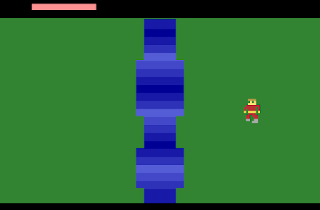 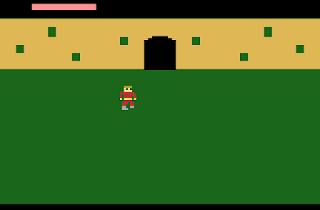 So....progress is slowly happening. Although if I keep thinking of new features, I might no longer be able to squeeze things in anymore! (I'm already down to only 160 bytes of ROM left in my "main" bank, although that's less timing-intensive, so I can jump to other banks for subroutines if necessary)
By Nathan at February 20, 2016 No comments:

Ok, I finally took the time to sit down and work on the subscreen, and it turned out to be pretty fun, actually.

For now, I omitted the password portion -- I want to include it, but because the total ROM space is going fast, I want to make sure I have the rest of the content first. So right now the subscreen looks a little weird, all bunched up at the top. I'll spread it out a bit if I decide not to do the password.  And I need to adjust a few things (key colors, horizontal alignment of the keys, etc)

I'm also alternatively considering adding some sort of low-resolution map to the bottom half instead. I have no idea how that might actually work, or if I have any possible way of actually doing it with the limited resources I have. But it sounds cool.

I've currently spent some time working on the inventory screen, which for some reason hasn't been easy to get excited about. It seems like a lot of hassle trying to get everything to nicely display.

The first part is getting the player's keys to display. Because you can tell the atari to triple each sprite, it's easy to get potentially 6 keys to line up on the screen. The trick is getting the timings exactly right to change the color appropriately for each key.  I'm pretty close at this point.

Unfortunately, my code to pick the colors based on the key type isn't quite right yet.

The next part will be to display numbers (or if that's too hard, bars) for health, attack power, armor level, number of arrows, and other items.

Then what I really want to do is also have a password system, similar to early NES games, where you can continue by entering a password.  But I'm not sure that I'm going to have ROM space -- showing the current password is pretty easy, but a password entry system might take up too much room. We'll see.

So getting bored and annoyed with that, and after seeing some of the amazing title screens that folks on AtariAge have come up with, I decided to rework my title screen. I played around with a few designs (I tried a sky into ocean with waves that come and go on a beach, but when I asked my friend Tim what he thought it was supposed to be, he couldn't tell, so I gave up on that idea), but finally settled on this road going off to the horizon, with trees around it. It was fun to make, and pretty simple to put to together: 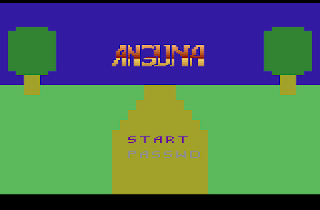 Well, I bought a new RF adapter, soldered on a new controller jack, and bought a Harmony Cartridge.

With that in place, it only took about an hour to solve the problem: 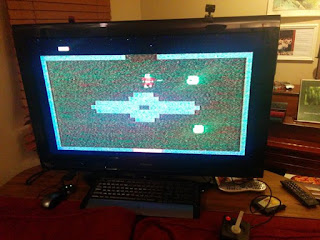 Going through the process of starting with ridiculously simple sample code, testing on the Atari, and then slowly adding complexity until it broke, I finally narrowed it down to a relatively small subset of places that the problem could be.

It turns out that I was trying to do some fancy bank jumping acrobatics before properly zero'ing out everything.  Ok, boring explanation time:

When you turn on the Atari, the entire block of ram, and the state of the CPU registers, are completely unknown. So the first thing you should do is start zero'ing them out.

Now one of the things that's unknown is also what memory bank you're running in. Which means that although you know what memory address the program starts at, it could be in any bank. So one of the first things you need to do is, in the same place in every bank, run code to jump to the bank that has your actual program beginning in it.

Jumping banks is as simple as writing to a magical memory location, BUT that just immediately switches banks, leaving your program counter (ie memory location of the next instruction) as it was. So you have to make sure everything lines up nicely. I previously explained how I made some general routines for doing bank jumps, which involved writing an address to the stack, then issuing an RTS command, (return from subroutine), which makes the CPU pop an address off the stack and jump to it.  And I was using those for my initial beginning-of-program jump to my actual code.

Well, it turns out that if your stack and stack pointer are all in a broken random state, you can't reliably write an address to the stack and return to it.

The awesome Stella emulator has some settings to randomize memory on startup, which helps you generally find these issues, but I guess it wasn't randomizing something quite enough. Because once I properly zeroed out and initialized everything BEFORE doing my bank jump, everything worked!

Now I need to figure out why the colors are so completely different....
By Nathan at February 02, 2016 No comments: