Well, it's been a few months since my rather negative review of my Pebble. So now that they've released a couple versions of the SDK, it's time to restate my opinions.

First, please note that I'll be specifically referring to using the Pebble with an Android phone. Due to the developer restrictions in the iOS world, my coworkers and I haven't found iOS apps that interface with the watch to make it do cool things. There's a primitive http tunnel app (HttPebble) that lets watch apps communicate with specially coded websites. But that's all I've seen. (if anyone knows of any, please let me know!) Until things change, I wouldn't bother with a Pebble if you use iOS -- you can't do much more than you could when I wrote my last review. Sure, there are a few watchapps that don't require communication, but those are of limited functionality. And the HttPebble tunnel is limited enough to keep it from being a general solution for integrating with many external websites.

But in the Android world, people have jumped in and written apps to make the Pebble start to fulfill the promise of the "smart" watch. First, I'm still rather unimpressed with the software created by Pebble itself. It takes the development of these 3rd party apps to accomplish what I expected Pebble to actually come up with in the first place.

That being said, there are 2 Android apps that deliver a pretty good "smart watch" experience: Glance for Pebble and  Canvas. for Pebble

Glance is the first of the two that I discovered and tried, and the first Pebble app that made my Pebble useful. It has a few options for the display, which includes things like weather, missed calls, missed email, etc. The other nice thing about it is that is has quite a bit of interactivity. You can send pre-written text messages, launch tasker scripts, etc. Overall, it's pretty nice, although the main watch face isn't extremely configurable. 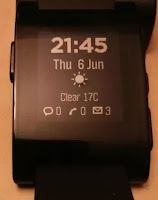 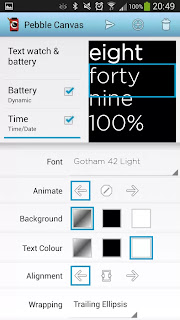 If being configurable is what you are looking for, Canvas for Pebble is amazing. It features an on-screen designer (on your phone) to customize your watchface. You can add layers, move them around, hook into phone sensors, tasker variables, weather, etc. And it features a plugin system so you can write your own layer types. I've been using a custom watchface that shows date, time, weather, missed phonecalls, number of unread emails, my next appointment on my calendar, and a small noitfication if my phone and watch disconnect from each other (ie if I left my phone somewhere).  I have vague plans to add a few custom plugin layers, if I ever get around to it, but we'll see.

While it doesn't have any interactive features (you can't control things from the watch, it's merely a watchface), it's amazing as far as getting your watch to look the way you want.

So that all said, I finally feel like the Pebble is neat. My watch is "smart" now, whatever that means.

There are some problems still. I get random disconnects every few days, that usually require me to turn off bluetooth and turn it back on before it will reconnect. The music control and display feature built into the watch doesn't work well with Pandora. Battery life is shorter with these smarter watchfaces (usually 5 or 6 days instead of the 7-10 I was getting). But overall, it's not a bad product at this point. Although I'm still not convinced it's worth the price.
By Nathan at August 26, 2013 No comments: