The real trick for Spacey McRacey (as I'm calling it now) is going to be making it fun.  And that's what I'm rather unsure about at this point.

I have a game design that basically works. The technical issues are mostly sorted out, I just need to get a few more implemented before I can seriously play test it.

But fun? It's hard to know if it's actually going to be any fun to play.  With a 4-player party-style game, it's seems like it might be hard to hit that fine line where everyone is close and competing, where everything feels exciting and tense, as opposed to tedious and boring.  And despite envisioning my game as fun, it might just be boring to play.

Some of that comes down to tweaking it. Tweaking the speeds, difficulties, etc, will make a difference. (If it's too easy to shoot people from behind, then it will be nearly impossible to hold a lead for very long, which could ruin it and make it no fun. If it's too hard to kill the guy in front, it will be tedious the other way. If the barriers are too hard to dodge, then players won't have any attention left to fighting each other, which will be boring.  If they are too easy, then they will be pointless, and it will just be a shoot-em-up)

So I'm really looking forward to getting a bit more done, and then conscripting some friends to come over and spend an hour or two playing it.  I might need to have multiple builds ready that night, with slight variations in the timings and speeds and difficulties, to see which works the best.

The Theory of Fun and books about game design

I got a book out of my local library called Theory of Fun for Game Design which is (or is supposed to be) all about this concept. I was a bit disappointed. I thought it would give some good principals for coming up with a good game design.  But it really didn't.  It was mostly fluffy stuff about how the author thinks about games from a theoretical point of view, but didn't really have anything practical.   We have another book in our library called The Art of Game Design which I read once years ago (it was checked out when I recently went looking for it), and is a MUCH better resource about this topic. I don't really remember much about it, but I remember being really inspired to try to make something fun after reading it.
By Nathan at November 18, 2016 4 comments:

So at PRGE, I played an arcade game that just left me amazed.  Killer Queen.

It's a 10-player game. You have 2 cabinets linked together, and 5 players huddled on each one. Each one is a team of 5 people, working together to play a simple one-screen 2d platformer.  But what made it work was the high quality game design.

First, the game is relatively simple, yet there is a lot going on at once.  One player plays the queen, the most important and powerful character on the team. The others start as workers, but can become warriors who can fly around and attack in a very joust-like flappy contest of height.  The real trick is that there are three completely different ways to win: either collect a bunch of berries and bring them back to your base, or ride a REALLY SLOW snail across the screen (while other people try to kill you, and you hope your team protects you), or kill the enemy queen 3 times.  There's some other things going on as well (using berries to upgrade, capturing upgrade points with the queen, etc), which means there's a lot going on at once. 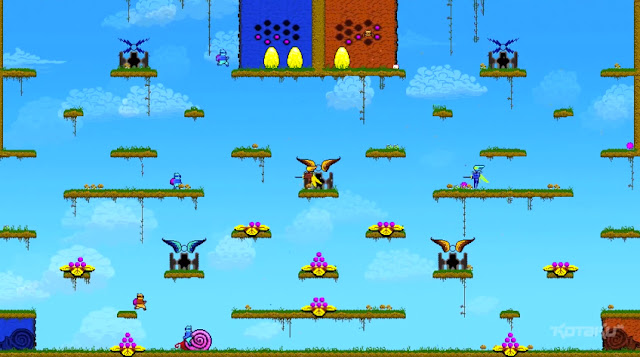 The joy of it is that it really pulls you together as a team in a super fun and exciting way.  You'd jump into a game with a bunch of strangers, but suddenly you're talking back and forth (in close proximity as you're squeezed around a tight arcade setup) about what everyone needs to do, how to stop the other team, etc.  My description doesn't really do it justice -- the game is so simple, yet did such an amazing job of pulling in people to work together and have fun.

My only complaint is how hard it is to find a way to play the game. There's only a handful of the machines made, and no way to play it other than to go somewhere that has it.  I keep daydreaming of somehow coming up with a way to buy one and put it somewhere in my town, because I was so impressed with the game design.  There's just very few times you play a game where they nailed the game design so perfectly.

Really, I'm jealous that I didn't think of it. Any programmer could make a clone really easy. But to come up with the design like that that worked so well?  Sigh.
By Nathan at November 17, 2016 2 comments:

I couple weeks ago I had the chance to go out to the Portland Retro Games Expo, where Al from AtariAge had Anguna set up to demo. 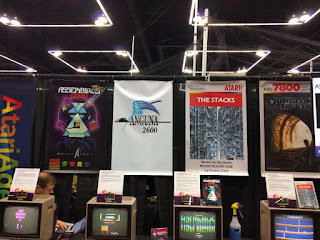 What an amazing time. I could talk for a long time about how cool it was, but a few highlights:

Atari Anguna is finished at this point, I'm waiting for some art, and then I'll declare it officially "released"  whenever we get a chance to release the cartridge through Atari Age!