Well, after I got excited and started work, I haven't actually done much recently.  I've been reworking the level loading code from Anguna, but there's still a good bit to do.  I'd really like to get some sample graphics into the engine so I can visualize things better, but that will still be awhile before any graphics are ready.

So until then, I'm still playing old nes games.  The most recent was Strider.  Strider is an interesting game:  it has a great concept, cool story and mechanics, a fun almost detective-style "find the next file of information to see where you can go next" thing.  Unfortunately, the game is riddled with problems.  The play control is glitchy and awful -- if you jump near a wall, often your jump immediately ends and you fall to the ground.  The hit detection is completely wacky.  In most cases, it doesn't really pay off to fight carefully, because you never know when the game will think you've made contact with the enemy, or if it's made contact with you and damaged you.  So you basically run around swinging your little sword thing (the game calls it a "cipher") and hoping you don't die.  This REALLY puts a damper on the fun factor.....it's neat exploring new areas and figuring out where to go next, but it's no fun when you actually get there.

Overall, I enjoyed the game somewhat, but it was also moderately painful, fighting bosses that I had no idea if I was hitting, not being able to make jumps that should be easily jumped, etc.  The game was also a little bit too short for my liking, but that's ok. 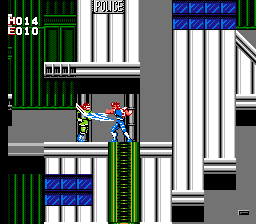