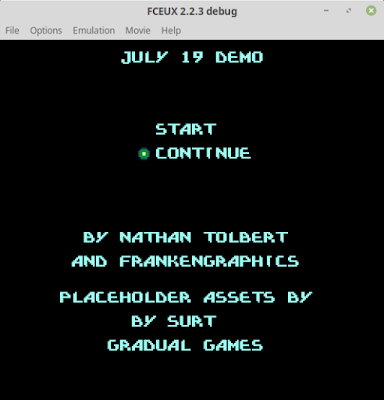 I wrote about bank switching a few years ago when working on Atari Anguna. The idea being that the 6502 (or worse, the 6507 which is the variant of 6502 in the Atari) can only address a certain amount of ROM memory, so larger cartridges use multiple "banks" where you can switch which bank of ROM you're using. Nintendo cartridges used the same technique, so bank switching is important on both consoles.

Many variants of cartridge hardware (commonly known as mappers) divide ROM space into 2 (or more) sections. One that always stays active, and a second section that you can switch. This is a lot easier than switching the entire ROM space at once, as you can control things from the fixed bank, and just load data or call routines from the swappable banks as needed.

The mapper that I'm using for Halcyon (GTROM) doesn't have a fixed bank. Like Atari Anguna, it swaps out the entire bank all at once. Which means that you have to have special code to call a routine in a different bank. You put a stub of code (commonly called a trampoline) in the same place in both banks (or in RAM, which doesn't get swapped). You call that stub, it changes banks, then calls the new routine.

That's worked well for me so far on Halcyon. But now I've realized I have about 15 subroutines that I call a lot and from all sorts of different banks. I decided it would be faster (both in terms of writing code, and in execution) to avoid trampolines for those, and instead, duplicate just those routines into every bank that uses them.

First, I compile the whole project once, leaving blank space in the places where the code should be duplicated to. One of the linker outputs is a nice map file, which tells the address of every piece of code in the final assembled output. So I have a python script that analyzes the map file, and extracts the portion of compiled binary that should be duplicated in other banks. It writes this to a file, and compiles everything again, this time injecting that extracted binary into each place that it needs to be duplicated.

This worked perfectly until last night when I started getting weird crashes calling code in this duplicated pseudo-fixed bank. Why was it crashing?  After an hour of angry debugging, I discovered the issue:  My python script had an off-by-one error. It was omitting the last byte of the pseudo-fixed bank.  Which means I had half an instruction dangling without the other half. That would do it.
By Nathan at July 19, 2019 No comments:

I feel like I'm finally making real progress. Using some placeholder graphics from the ever-amazing surt, I've got the first boss fight finished. This boss is the main obstacle in your way from finding the tank vehicle, so you have to fight it on foot.

In Halcyon, bosses are mostly just another instance of a regular enemy, just harder. There were a few differences which I'll talk about in a minute, but interestingly, those differences aren't what took me the most time with this fight. Really, the things that took the longest were bugs in my main enemy-handling code that only revealed themselves while developing the boss fight:

Once I got those things worked out, developing the things specific to bosses was pretty quick:
The two things that I'm still missing are special boss music (which should be easy, but I just need new music), and a larger and more interesting explosion for bosses.

That said, other bosses in the game might require something more complicated -- larger bosses might be made from background tiles, and require some sort of background-scrolling magic to animate them. We'll cross that bridge when we come to it.

It's almost time for another round of testing, to see what's completely broken, or if the challenge level is acceptable. If you're reading this, and are interested in helping test the game, send me a message!
By Nathan at July 14, 2019 No comments:

Enemies are the type of data-driven thing in video games that are fun to think about, in terms of tooling and development.  They have lots of stats (health, size, damage they do, etc), and a lot of different behaviors attached (What function runs to update them? Does anything special happen when they take damage? What about when they deal damage? Or when they die?)

There are tons of solutions for how to handle this. But one of my soap-boxes is that game data should be defined in a textual format, and be easy to edit (either by editing the text format, or with an easy UI tool).

For Halcyon, I decided to use a YAML format for enemy definitions. YAML is a data definition language, similar to XML or JSON. If you read about it, there's all sorts of reasons people say you shouldn't use it. But it has one important thing going for it: it's really easy to read and write. Which is what I need for this game.

I define my enemies in a YAML format, specifying both their numeric stats, the name of some animation data to display them, as well as various routines and properties to define their behavior. My build script then converts this YAML at compile-time into an assembly language file that defines arrays of data to represent each enemy.  Symbol names (like enemyb_8wayBulletUpdate) get injected right into the generated assembly code, and the linker knows how to translate those into the addresses of the functions that they refer to.

One of the things that can use up a lot of your CPU time on the NES is metasprite rendering.  Each hardware sprite is 8x8 pixels (or optionally 8x16). Complicated characters are then made up of a bunch of different sprites together, which is often referred to as a metasprite.

Rendering a metasprite isn't complicated -- you push X, Y, tile, and color values into the right spot for the first sprite, then read the next sprite, adjust X and Y appropriately, and repeat.  The problem is twofold. First, it's just a lot of instructions on the 6502 to read, add, and write the sprites, when there's a lot going on onscreen.  Second, you have to deal with clipping.

Sprites can be positioned from pixel 0 to 256 horizontally, which is represented in a single byte. If you wrap around from 256 to 0, the sprite will appear on the left side. So for a large metasprite that's near the edge of the screen, you have two options.  First is to hide the object entirely if any of the sprites go off the edge. This is faster, but looks bad -- the character pops onto or off of the screen. A lot of old nes games do that, and you get used to it as a player, but it looks cheesy.  The second is do check each single sprite as you're computing its position. If a sprite's X value wraps around from 256 to 0 (or vice versa), you omit drawing that sprite. That gives a much better appearance of smoothly scrolling off the edge of the screen.  Unfortunately, it's that much more math you're doing for each sprite in the game.  Since enemies are often made of at least 4 sprites, and often 8 or more, that can become cumbersome very quickly.

In Halcyon, I wasn't happy with the popping-off-the-edge solution, so I opted for taking the time to check each sprite. To try to keep it easier on the CPU time, I have a number of ugly optimizations that make the wrapping/clipping checks a bit faster.  Unfortunately, one side effect of those optimizations is that my metasprites can only be 32 pixels wide or tall.

That was fine until this week, when I wanted to make a tall barrier that opens when you defeat a boss.  It needed to be more than 32 pixels tall.

That was tonight's challenge -- how to work around my optimizations and allow larger enemies?

The answer ended up being fairly simple: I still limit each metasprite to 32x32 pixels, but I allow a metasprite to specify a new base position and start a new metasprite from there.  So really, a metasprite can be more of a meta-metasprite, being made of a few different metasprites at different offsets.