I just realized I never did a post after the Portland Retro Game Convention talking about how great it was!

The first great part was just standing in line to get in.  I started chatting with the fellow in line behind me, who not only was familiar with my Atari version of Anguna, but had actually bought a copy just a few weeks before the convention!

The convention itself was a blast -- the biggest highlight was meeting (in person) many homebrewers that I've gotten to know in the AtariAge, NesDev, or NESDev twitter communities.  It's nice to finally put faces with names (or real names with internet names!).

Other than that, I spent a lot of time hovering in the background, watching people try out the Quadtari. It was fun seeing people pick it up and give it a try.  (What surprised me most was the number of teenagers who had no idea how to hold an Atari joystick.)  At one point, Joe Decuir, the engineer who designed much of the hardware of the original Atari, made a stop by to see it! 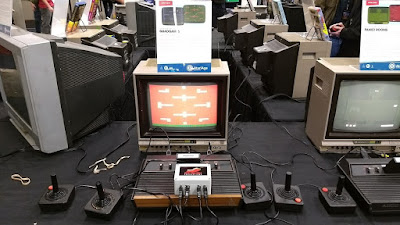 Now I have a lot of work to do. The first prototype took me hours of soldering, about $25 in parts, and is already getting a little unreliable after being jostled so much.  So it's time to design a proper PCB and it get it properly made.  I've got a board designed that I hope is the same as what I prototyped, and I'm in the process of getting quotes on PCB fabrication and soldering assembly from a place in China. We'll see what happens!
By Nathan at November 29, 2017 No comments:

So one of the main goals of Robo-Ninja Climb was to see how quickly I could crank out a reasonably playable NES game.  Nothing ground-breaking, but a short fun game.

The answer is 3 weeks of evenings.  Approximately 40 hours, maybe. I've got a game that's certainly playable (although by all reports, a little too hard. Oops, I'm bad at that)

I decided partway through to ditch the "endless" part of it -- I realized I didn't have a good plan for making random levels that were actually fun to play.  So I designed 5 short levels, with a few power-ups part way through.  Each has slightly different background graphics, to give the player a sense of progression. 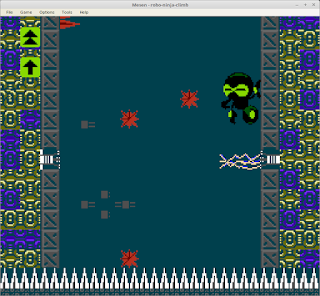 A few thing that I felt like were somewhat interesting during the development:

Well, other than collecting feedback, tweaking difficulty, and possibly adding some music from another composer, I think it's done. And I still have 2 months left before the deadline! You can try it out using any NES emulator, and grabbing the rom from my bitethechili site.  If you do, let me know if you have feedback!
By Nathan at November 29, 2017 No comments:

Well, out of the blue, I decided that I was missing out by not entering something into this year's NesDev competition, so a couple weeks ago I decided to see how quickly I could churn out a simple-but-fun game.

My idea is an endless-climber type of thing, based on the Robo-Ninja character. You just bounce back and forth scaling walls while dodging obstacles. 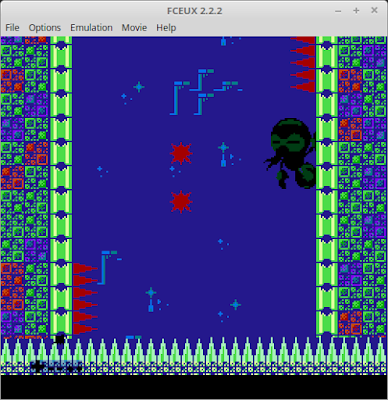 It's been fun, trying to churn this out as fast as possible.  To be as efficient as I can, I reused a number of routines from my primary nes project, and then have been coding everything in a mix of C and assembly, switching back and forth at whim, using whichever seems easier for any given part of the game.

I just finished my 7th day of development, and it's almost a playable game -- I just need to make collisions with the obstacles actually work, and tweak the controls a bit, and it will be time for some preliminary testing: the standard "is it actually fun" sort of thing. We'll see.

There's a lot more I'd love to say about some of the technical challenges of writing this game, but with trying to finish it as quickly as possible, I end up not wanting to waste time writing about it.

Like last year, I don't have a lot of intentions of winning the competition, but I couldn't pass up a chance to at least enter something.
By Nathan at November 10, 2017 No comments: