So I had this crazy idea.

The game logic of Robo-Ninja Climb is really simple. And so is the display. So in theory, with the NES and the Atari 2600 both having the same 6502 processor, I could take the NES source code for the game, rip out the rendering bits (and sound and controls), leaving just the core game logic, move it directly to the Atari, then rewrite all the rendering stuff.

In theory, this is made even easier by the fact that the Atari has built-in collision detection. On the NES, about half the work was tracking where you had scrolled, so you could do the math to compute collisions against spikes. On the Atari, I don't have to do that -- as long as I can draw them, it will do collisions for me. Which saves a ton of processing time.

So I got to work. First thing was stripping down everything I didn't need, replacing the controller code, and bringing over the main character physics. That went smoothly, and compiled for the Atari quite quickly. Of course, then I had to find a way to see if it worked.

Which meant writing an Atari kernel. I think it's somewhat like what women say after having a baby -- after a few years, you forget the pain and only remember the happy parts. Back to counting cycles, trying to squeeze everything into the 76 clock cycles per scanline. Ugh.

Anyway, after all that, I've got most of an Atari port of Robo-Ninja Climb working. Over the last few weeks, I've been slowly working through the more tedious or difficult parts: rendering items, adding title and level transition screens, etc. With a few more hours of work, I might have a Robo-Ninja Climb port for the Atari! (and I wonder if it's the first Atari port to ever directly use source code from the NES game that came first?)

Yes, I'm still working on the BlasterMasterMetroidVania game. And the 4-player adapter. I promise.
By Nathan at July 06, 2018 No comments: 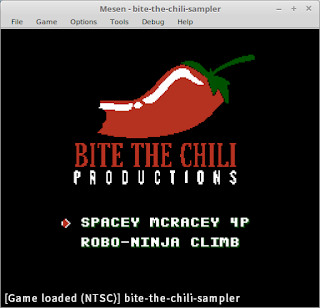